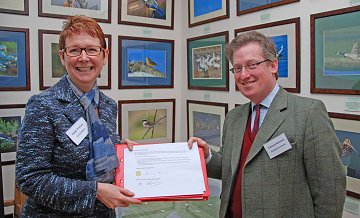 Conservation work to boost the heather-clad splendour of England’s moorland has made the biggest contribution to a massive improvement in the environmental health of the network of the country’s best wildlife sites – Sites of Special Scientific Interest – say Natural England and The Moorland Association.

Sites of Special Scientific Interest (SSSIs) are the country’s top wildlife and geological sites and provide vital refuges for wildlife and essential free natural resources for people. There are 4,119 SSSIs covering more than a million hectares of the land surface of England – more than eight per cent of the country.

Since 2003, when just 57 per cent of SSSIs were assessed as being in favourable or recovering condition, they have been set on the road to recovery with the result that 96.5 per cent of England’s 4,119 SSSIs are now either in favourable condition or are on course to reach it.

Work carried out to improve the conservation condition of England’s heather moorlands has made a major contribution to the success story. Today, 96 per cent of grouse moors are in favourable or recovering condition, compared to 25 per cent six years ago. The support of upland landowners and grouse moor managers has been crucial in achieving the goal and the contribution of members of The Moorland Association – who manage grouse moors covering 344,000 hectares of uplands from the Peak District to North Northumberland – has been vital. They look after nearly a fifth of all England’s SSSI land.

Natural England’s Chief Executive, Dr Helen Phillips said: “Heather moorland, brought about by centuries of management for sheep and grouse, plays an essential role in maintaining the wildlife richness and much loved heather clad landscapes of Northern England. Natural England appreciates the very significant benefits that current best practice management on these grouse moors delivers and we applaud the members of the Moorland Association for their continued careful guardianship of these special places.”

The successful turnaround in the fortunes of England’s SSSIs owes much to the tireless efforts of an army of farmers, land managers, volunteers, charities and public bodies and follows seven years of collaborative working.

Natural England marked the SSSI success at an event on the Weardale Estate ( 16 March) on the Durham/Cumbria/Northumberland border to thank some of the many land managers, charities and public bodies who have all helped improve the condition of England’s network of SSSIs. It was also an opportunity for the Moorland Association to showcase the kind of conservation work that is carried out on grouse moors to help restore the peatland and heather habitat. This work uses specialist equipment to help restore wetland habitats, enhances water quality, helps reduce flooding and locks in carbon which could otherwise be released into the atmosphere as carbon dioxide, one of the greenhouse gases causing climate change.

Edward Bromet, Chairman of The Moorland Association, said: “The red grouse is an iconic upland species and a symbol of healthy moorland landscapes. Seventy five per cent of the world’s remaining heather moorland is found in the UK. Thanks to grouse moor management, England’s uplands are home to the highest breeding populations of wildlife such as curlews, golden plovers and black grouse, but they are much less well known for their vital role in providing a wide range of free natural services. A well-managed moor provides clean water, an attractive landscape, flood protection, carbon storage, places for quiet recreation and also produces unique foods such as wild red grouse, heather fed lamb and heather honey.”

One of the biggest single factors in improving SSSIs has been the availability of grants such as the Higher Level Stewardship scheme, which benefit almost half of all SSSIs. The schemes are a combination of EU and British government funding which rewards farmers and land managers for conserving England’s most important wildlife habitats. 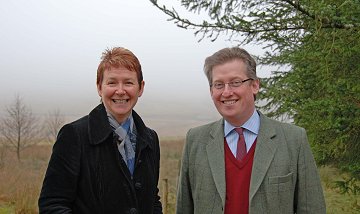 Helen Phillips continued “By providing essential habitat that may not be found elsewhere, SSSIs represent a life support system whose importance cannot be overstated. It’s important that we celebrate and secure the future of these last refuges and the species they sustain in the face of climate change.”

On the Weardale Estate work has been carried out to enhance the blanket bog and other moorland habitats, and improve the ecosystem services – the essentials of life provided by Nature – in this part of the North Pennines. More than 25km of moorland drainage ditches (grips) within the SSSI have now been blocked in partnership with the North Pennines AONB Peatscapes Project and this, combined with sensitive grazing management, means this moorland area is being fully restored. A new HLS agreement has recently helped fund the expansion of grip-blocking on blanket bog over some 1300ha of moorland, as well as funding around 8 ha of new woodland planting. Establishing small pockets of woodland in the hills could prove invaluable as climate change forces species to move into new upland habitats.

Similarly, Bowes Moor in Country Durham has been transformed through a partnership between landowners, commoners and conservationists, helping to sustain species such as merlin, golden plover and black grouse. In Derbyshire, Howden moor pioneering techniques have seen 1000 acres of heather return in the last decade and birdlife increase dramatically, and in Yorkshire, on Bingley and Hawksworth moors where bracken had taken over, it has been controlled to reveal and conserve archeological remains and foot paths have been improved for public access.

England’s first SSSIs date back to 1949, created to protect the best of England’s natural habitats, wildlife and geological heritage for the benefit of present and future generations. There are 4,119 SSSIs covering more than a million hectares (1,082,164 ha) of the land surface of England – more than eight per cent of the country. The smallest, Sylvan House Barn SSSI in Gloucestershire, is a space of just 4.5 square metres. The biggest is The Wash SSSI, Lincolnshire/Norfolk covering 6,2045.79 ha. Almost 30 per cent of the area of SSSIs is in the care of private landowners.