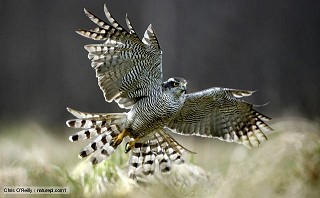 The Moorland Association and four other leading land management and conservation organisations in the Peak District National Park have condemned the destruction of a goshawk nest in the Derwent Valley.

The organisations – the Moorland Association, the National Trust, Natural England, Peak District National Park Authority and the RSPB – were responding to the discovery of the destroyed nest and smashed goshawk eggs which is now being investigated by the police.

The destruction leaves only one known active goshawk nest in the Derwent Valley, which previously held six known pairs of these birds. The RSPB is offering a £1,000 for information leading to a conviction, which took place on land owned by Severn Trent Water.

The organisations, which last year launched a Birds of Prey Initiative to achieve breeding targets for merlin, peregrine and short-eared owl, have been working together since 2008.

John Lomas, of the Peak District National Park Authority, who chairs the group, said: “We strongly condemn any wilful destruction of nests and eggs.

“We have been making good progress working closely with bird groups, landowners and gamekeepers to secure the right protection for rare species, and the destruction of this nest is a setback.”

Said Ben Rimington Wilson of The Moorland Association: “We have been working hard with all interested parties to protect and boost the population of birds of prey to sustainable breeding levels in the Peak District. The mindless action that has lead to this loss at such a key time of year is appalling. We hope that the police investigation is swift and effective and uses DNA and other evidence to bring the perpetrator to book as soon as possible. Anyone with information should contact the police immediately on the non-emergency crime line 101, or contact Crimestoppers anonymously on 0800 555111.”

Goshawks nest principally in mature soft wood forestry plantations and are agile enough to hunt through the trees.
They hunt over most types of ground including the fringes of heather moorland. They are extremely adept and opportunist hunters and are as powerful as a peregrine and big as a buzzard.
All small mammals and most birds are potential prey from dippers to dunlin, lapwing to curlew– both chicks and full grown adults.
Female Goshawks have been seen killing short eared owls and sparrowhawks that invade their territory.
Goshawks pair for life and territories are at least 1km apart.
The UK population of Goshawks has increased dramatically since 1975 when there were just 34 pairs, to a breeding population of 397 pairs in 2009.