Details of a new six point action plan have been published today by Defra to help the recovery of England’s hen harrier populations. 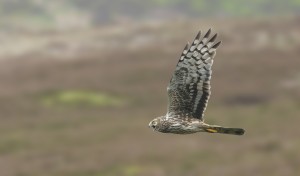 PLANS to help revive the hen harrier, one of England’s most iconic birds, have been published today as part of the government’s ongoing commitment to preserve and enhance our nation’s natural environment.

As a bird of prey, hen harriers make an important contribution to our intricate ecosystem – and are a well-loved feature of our skyline, but in recent years their numbers have dropped.

The Hen Harrier Action Plan will for the first time co-ordinate action already taken by conservation groups, landowners and wildlife crime officers across the country to ensure a consistent and strategic approach. The plan will also encourage groups to share best practice to help reverse the decline of these precious birds.

This new plan will transform the fate of one of our most magnificent birds.

We are working closely with conservation organisations and landowners and with their help, this plan will help hen harriers flourish once more while coexisting with a thriving rural economy.

Our wildlife is a crucial part of our national identity. That’s why we care deeply about protecting this vital species for future generations to come.

We welcome the publication of Defra’s Hen Harrier Action Plan which sets out an important set of actions to help improve the conservation status of hen harriers in England.

Natural England is firmly committed to this shared plan and has been asked by Defra to lead on the implementation of some of the actions set out in it.

We are looking forward to working with a range of organisations and land managers to help secure a future for the hen harrier as a breeding bird in England.

The plan was developed by Defra in conjunction with the RSPB, Game and Wildlife Conservation Trust, Moorland Association, National Gamekeepers Organisation, National Parks UK. Natural England will lead on the six point plan, working with organisations to:

Some of these actions, like monitoring and sharing best practice, are already underway at known nesting sites, such as in the Forest of Bowland in Lancashire. Other actions, such as trialling brood management, will be looked into by Natural England which will work closely with partners to determine criteria for a field trial.

This countrywide action has already seen nest figures increase last year, from four in 2014 to six in 2015.

The plans will also help deliver on a key manifesto commitment for this government to conserve and enhance the environment as part of a comprehensive, long-term vision to protect the country’s natural heritage. Defra will publish a detailed 25 year plan for action on the environment later in the year.

Director of the Moorland Association, Amanda Anderson, commented following Defra’s announcement: : “We are delighted that the Recovery Plan has been launched to help Hen Harriers breed sustainably across their former range in England. The plan contains exciting new actions that we are looking forward to working on with others to ensure they are successful.”