Gamekeepers from nine grouse shooting estates in the Peak District today returned to Saddleworth Moor to help combat the devastating wildfire that has raged throughout the week.

Twelve keepers are working on Arnfield Moor, which is managed by RSPB and owned by United Utilities.

Richard Bailey, from the Peak District Moorland Group, said: “Gamekeepers from nine shooting estates stepped up to the plate bringing not only their experienced firefighting skills but also Argocats equipped with specialist ‘fogging’ units – which enable us to train water on the fire – on to the moor.” 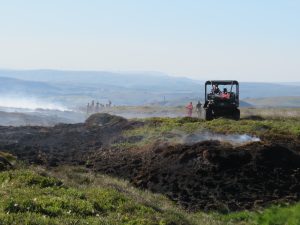 Gamekeepers and the Fire and Rescue Service tackle the fire

“The fire has been horrendous, and everyone has been working together flat out to get it under control.  Two helicopters were on site and worked with such skill and precision dropping water onto site and filling temporary dams to keep our foggers topped up and to run hoses out for direct spraying.”

“We’re extremely grateful to volunteers who came up on the moor with food and water for those tackling the fire.”

“The scale of this fire is staggering, and the damage to precious wildlife and unique habitat is unimaginable. There’s lots of speculation about the cause and that is a matter for police and fire service investigation. It is simply not correct for anyone to suggest that moorland management is at the root of this. The reason that this fire burned so fiercely is the extremely dry and hot weather conditions.”