Hen Harrier chicks bred on grouse moors in the North of England are ready and raring to go. 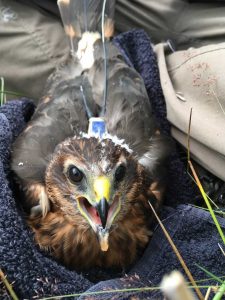 The eight chicks were born and fledged on two grouse moors within Yorkshire, including three chicks raised in the Yorkshire Dales National Park – the second year in a row there has been Hen Harrier success in the park area.

Five Hen Harrier chicks have also been bred successfully on a grouse moor estate in the Nidderdale Area of Outstanding Natural Beauty which borders the national park. Their father ‘Frank’ is a local legend, adored by locals, twitchers and gamekeepers alike. 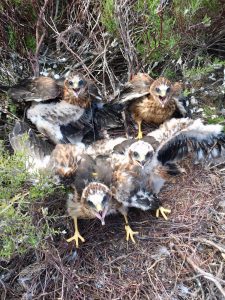 Nest of Hen Harrier chicks on a grouse moor estate in the Nidderdale AONB.

Some of the chicks have been satellite-tagged by Natural England and their progress will be monitored.

There are 5 more successful Hen Harrier nests this year on grouse moors across Derbyshire and Lancashire.

Amanda Anderson, Director of the Moorland Association, which represents grouse moors, said: “Our members are delighted to be reporting breeding success of Hen Harrier chicks on their grouse moors. We have been working closely with Natural England to help restore Hen Harrier numbers and they have been very supportive of our efforts.

“Growing the Harrier population is a goal shared by many with the countryside at heart and there are many initiatives underway to help make that happen.” 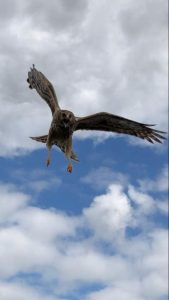 ‘Frank’ the Hen Harrier, father of several Hen Harrier chicks that have fledged this year.

Sonya Greenwood, from the Yorkshire Dales Moorland Group, said: “It’s tremendous news that the Yorkshire Dales National Park is seeing breeding success for the second year in a row and this is testament to the commitment by gamekeepers to play their part in restoring Hen Harrier numbers.”

Members of the public are asked to keep their distance as these birds are easy to disturb.