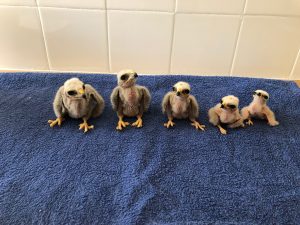 Grouse moor owners today voiced their support of Hen Harrier Day and predicted that breeding success of the species in England this year had marked a ‘turning point’ in efforts to rebuild the population.

Following the announcement by Natural England earlier today that hen harriers have enjoyed a record year for breeding success in England, Amanda Anderson, director of the Moorland Association, which represents grouse moor owners, said: “The fact that 47 chicks have been produced this year – many of them on land managed for grouse shooting – is hugely encouraging.

“The Hen Harrier Recovery Plan has led to 99 chicks since 2016 thanks to partnership collaboration. 81 of those chicks have fledged in the last two years with the help of the Brood Management Trial licence and we believe this signals a turning point in efforts to restore the harrier population.

“In our view, a key element of this achievement was the decision made two years ago to introduce a brood management trial and we are already showing signs of real progress.”

The brood management scheme, which is a partnership project operated under licence from Natural England, is a scientific trial that enables chicks to be transferred from grouse moors to a raptor rearing facility and then released back into the locality from where they were collected once they were capable of fending for themselves. Several chicks have already been relocated and released back into their ‘home territory’.

Amanda Anderson, who is attending a Hen Harrier Day event in Derbyshire, said: “Grouse moor owners signed up for this scheme and by doing do signaled their commitment to help bring back our harriers.

“We support Hen Harrier Day and we hope that everyone who champions the restoration of the species will recognise that there is a tremendous amount of goodwill and partnership working going on to make the brood management trial a success.”

A video of the brood management trial in action