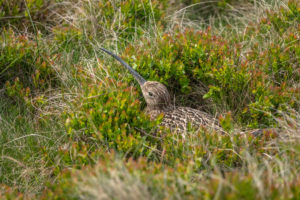 A new survey of breeding birds in the Peak District National Park has shown a positive trend in numbers of endangered species.

Populations of 16 bird species in the Peak District are up, in contrast to national trends from the UK Government’s State of Nature 2019 report.

Out of the 29 species sighted, the numbers of 21 species – notably golden plover, snipe and lapwing – have increased.

There was a dramatic increase in sightings of buzzard throughout the area, from one sighting in 1990 to 239 in 2018. Equally remarkable was a rise in raven sightings from 0 to 157 in the same period.

Traditional hill grazing, grouse moor management and peatland restoration have all played their part in these success stories.

The survey, which took place in 2018, and previously in 1990 and 2004, was carried out by Moors for the Future Partnership, in collaboration with Peak District land owners and land managers. The survey was funded by Natural England, the Moorland Association, National Trust, RSPB, Severn Trent, United Utilities and Yorkshire Water.

The Peak District and South Pennine moors are a vital and unique habitat for moorland birds. Their population numbers provide a key insight into the health of these moorlands. The purpose of the survey was to discover how moorland birds were faring and whether interventions that will enhance their habitat are having a positive impact.

The surveyed area covered 500 square kilometres in the South Pennine Moors Special Protection Area (SPA), roughly equating to the size of 70,000 football pitches. The British Trust for Ornithology analysed the survey results and drew comparisons to the previous two surveys to give an insight into breeding bird populations, and the influence of key factors. These factors include land use, land management and habitat conditions and types.

The Partnership presented the results at the Breeding Bird Survey Launch event on Wednesday 30th October in Marsden. A report, detailing the findings of the survey, was published at the launch, alongside a short research note, which highlights key findings. The event featured guest speakers from British Trust for Ornithology, James Pearce-Higgins and Jenni Border, to introduce the results.

In 1990, vast areas of black and degraded moors were a common sight in the Peak District and South Pennines due to historic pollution. Today, much of the bare peat is returning to vegetated moorlands due to the hard work of land owners and conservation organisations. Many moors now support native plants, including the invaluable sphagnum moss. These changes are crucial for increasing biodiversity. The importance of peatlands as a habitat features prominently in the Government’s 25 Year Environment Plan. However, the Breeding Bird Survey also reveals declining species that appear to be following the national downward trend, suggesting that more work is needed to enhance these vital habitats.

Richard Pollitt, Land Management and Conservation Adviser at Natural England said, ‘This moorland breeding bird survey for the Peak District Moors SPA helps Natural England to understand the status of these bird species on the moors over time. The survey results enable NE to work with landowners and farmers to take targeted action to protect and enhance habitats particularly important for these birds during the breeding season. It is especially pleasing to see a positive response from dunlin to the rewetting of bogs which has been a major conservation focus of agri-environment agreements over the past 15 years.’

Amanda Anderson, Director of the Moorland Association said, ‘We are delighted to see so many success stories within the Peak District National Park. Ground nesting birds are thriving in our upland skies for all to see. It is also encouraging to see a range of birds of prey sighted on the moors. Conservation efforts on the ground mean that bird populations are not just being sustained but improved, bucking national trends of decline.’

Chris Dean, Head of Programme Delivery at Moors for the Future Partnership said, ‘The success of this survey represents a victory for partnership working, with different groups and points of view coming together to gain a picture of how work on the moors continues to affect populations of breeding birds. We are grateful to moorland owners for allowing access to their land to make this survey as complete as possible.’

Sarah Fowler, Chief Executive of the Peak District National Park Authority said, ‘The Moors of the Peak District National Park support nationally and internationally important populations of a range of breeding waders and other moorland birds, and this breeding bird survey provides a vital health check of the wider ecosystem health of the moorlands. A healthy moorland is in everyone’s interests, not least the wildlife whose habitat it is, so it’s great to see the positive trends reported in this survey.’

The Summary of the finding can be found here: Breeding Bird Surveys of the Peak District Moors 1990 – 2018 Summary of Analysis