The Peak District Bird of Prey Initiative has published its 2019 breeding season report. 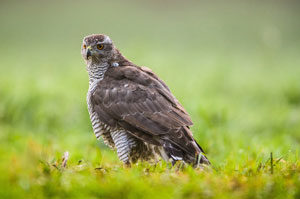 The report brings together data on key birds of prey or ‘raptors’ nesting within the Dark Peak – a largely upland region of the Peak District National Park.

Results from the 2019 season include the fledging of goshawks from all eight nests monitoredwithin the study area, along with the return of hen harriers once again to a nest in the Peak District.

This news was tempered by the death of one of the two young hen harriers a few days after fledging, from what are thought to be natural causes. The second youngster and both adults were also not seen again from about the same time.

Of particular note was that two of the eight successful goshawk nests monitored saw the first confirmed fledging following around two decades of failed attempts in the same locations, with co-operation on the ground between raptor groups and gamekeepers supporting the successful results.

Cases of reported wildlife crime activity against raptors in the study area also dropped from several incidents in 2018, to one suspected buzzard poisoning case plus one suspected theft of young from a peregrine nest in 2019. One further peregrine nest was deserted for unexplained reasons following egg-laying.

Challenges remain for the peregrine in the study area. There were just five confirmed nesting attempts, with seven chicks fledged from three successful nests.

Whilst 11 merlin nests achieved 41 fledged young, well above target and high enough to encourage an increase in the population, the number of breeding pairs remains unstable and saw an overall drop of a third on year-on-year averages since 2012, with both unsuccessful nests and vacant territories recorded. The reasons for these declines remain unclear, but are in line with wider UK trends.

More than 40 young short-eared owls also hatched in 2019, from about a dozen nests within the study area, though unfortunately many are thought to have subsequently died before fledging due to poor weather.

Although not part of the project’s focus, one of the UK’s largest raptors, the red kite, also bred at a location in the south of the National Park, bringing welcome news. This is the first confirmed breeding of red kite in the Peak District for over 150 years.

Sarah Fowler, chief executive of the Peak District National Park said: “Whilst these remain challenging times for birds of prey in the Dark Peak, a positive return to breeding for such an iconic species as the goshawk gives us cause for cautious optimism.

“Coupled with a reduction in reported incidents of illegal activity in 2019 – after a troubling series of cases last year – this demonstrates that partnership working with those who manage our upland moorland, raptor working groups and increased awareness amongst our upland communities can deliver results. My thanks to all who have contributed to creating this positive momentum for our birds of prey in the Dark Peak.

“We remain concerned for the peregrine falcon and will be working closely with police wildlife crime officers during the winter to ensure that all partners and agencies are ready to minimise the impacts of illegal activity next season.

“We look forward to working hard with all the Initiative partners to build upon the positive results seen in 2019, as we head into a new breeding season and decade.”

For the 2020 season, the Initiative has said its focus will include measures to deter peregrine egg and young theft alongside the police, encouraging earlier sightings and reporting and increasing joint site visits between gamekeepers and raptor monitoring workers.

Amanda Anderson, Director of the Moorland Association, commented: “The 2019 bird of prey breeding report from moors managed for grouse shooting is very encouraging and is testament to the hard work undertaken by gamekeepers and raptor fieldworkers. Merlin are holding their own with very high chick survival, Short Eared owls do well when vole numbers are up and the weather is kind, hen harriers returned to breed for a consecutive time – a first in a hundred years and chicks fledging from all Goshawk nests.  Peregrine are slowly recolonising old haunts and keepers are helping keeping watch. This report clearly shows that the best results can be achieved through partnership work.”

You can view the full report here

Rural organisations call for wildlife licencing in England to be brought back into central government   Leading rural organisations have today  joined forces to call on the Environment Secretary, George Eustice, to bring the chaotic wildlife licensing system run by Natural England back into central Government where it can be fixed. A new paper, ‘Wildlife Licensing in England: Chaos, Crisis and Cure’, written by the National Gamekeepers’ Organisation, the Moorland […]