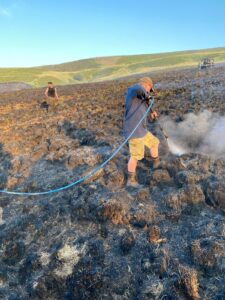 Gamekeepers and moorland managers in the Peak District have saved one of the most important moorland restoration projects in the country by successfully tackling a wildfire thought to be started deliberately.

Fire broke out on the edge of Woodhead Moor in the Peak District, Derbyshire, late on Thursday.

Twenty nine gamekeepers and staff from 11 local estates were on the scene within minutes and joined forces with fire services to tackle the blaze.

The fire ignited at the edge of one of the UK’s most significant moorland restoration projects which has received several millions of pounds of public investment in recent years. The project has been managed by Moors For the Future over a five-year period.

Given its location, patrolling moorland gamekeepers were able to quickly spot the fire, averting a potential disaster in which precious wildlife and heather moorland could have been lost. It is believed that the fire was started by people smoking shisha pipes and three separate ignition points were discovered.

Gamekeeper Richard Bailey, Peak District Moorland Group, said: “That this occurred on one of the most significant moorland restoration projects in the country was deeply concerning.

“Were it not for the expertise, equipment and proximity of trained gamekeepers, assisted by the local fire service department, this could have been absolutely devastating.”

Amanda Anderson, Director of the Moorland Association, said: “Yet again we have seen the expertise of gamekeepers prevent really tragic consequences for important wildlife and habitat. It is vitally important that we continue to have that expertise on hand in the countryside which helps not only control but prevent wildfires.”

RURAL ORGANISATIONS LAUNCH NEW PARTNERSHIP Leading UK rural organisations have today (23rd July) announced the launch of a formal partnership to promote the multitude of conservation and community benefits that make the countryside a better place for all to enjoy.   ‘Aim To Sustain’ has been formed to highlight the crucial role that sustainable game shooting plays in delivering biodiversity net gain […]

NEW OFFICIAL TREES AND PEAT GUIDANCE SUPPORTS GROUSE MOORS’ STRATEGY The strategy of grouse moor managers to avoid planting trees on peatland has been supported by new official guidance that acknowledges trees can damage peatlands. A framework for establishing new woodland issued by the Forestry Commission, Forest Research and Natural England reaffirms the importance of healthy peatlands to aid carbon capture. The guidance advises that […]