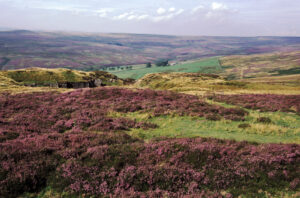 A dossier of new evidence on peatland protection has highlighted a raft of scientific findings that could help shape future conservation of some of the UK’s most iconic landscapes.

New research on key issues including carbon storage, water quality, biodiversity and wildfire reveals that conclusions drawn from previous science are now out of date and not safe to be used as the basis for key political decisions on the management of peatland.

The dossier comprises four reports from university researchers and scientists and focuses on the evidence surrounding the use of controlled burning to help restore, maintain and improve peatlands.

Key findings from the reports include:-
• Burned areas of blanket bog are capable of increased levels of carbon capture.
• Production of charcoal during managed burning has a positive impact on long-term carbon storage.
• Burning does not appear to cause water discolouration.
• Controlled burning reduces fuel loads and may, therefore, help to prevent and limit wildfires.
• Overabundance of heather is limited by burning.
• Environmentally important Sphagnum capillifolium moss recovers from ‘cool’ managed burning within three years.
• The ending of managed burning in the USA resulted in declines in bird life and an increase in devastating wildfires.
• Greenhouse gas emissions from controlled burning are insignificant compared with emissions from wildfire or severely degraded lowland peatlands used for agriculture.

Mark Ashby, of Lancaster University and Whitebeam Ecology, who, in the latest report, conducted an extensive review of evidence on heather burning, said: “The debate around heather burning remains unresolved. The review of the latest evidence demonstrates that some previously held assumptions are now unsafe and should, therefore, not be used as the basis for policy.

“This newly reviewed scientific evidence should be taken into account when determining how best to protect peatland in the future.

“The time is now right to review Natural England’s February 2018 position statement which takes a largely negative view of controlled burning and critically examine the circumstances in which burning may be an appropriate peatland restoration tool. The increased threat and impact from severe wildfires must now also be taken into account in terms of mitigating damage to the structure and function of blanket bog.”

Dr Gavin Stewart, of Newcastle University, who peer-reviewed the latest analysis of scientific evidence on heather burning, said: “The evidence base underpinning decisions about heather burning is highly uncertain. These deficiencies are unlikely to be resolved by accumulation of more studies alone. A more coherent framework is required which could include integrated adaptive trial designs and monitoring the impacts of different types of management to provide more robust evidence to support decision-making. Policy makers should build in the need for this sort of evidence gathering.”

One of the main findings from the Game & Wildlife Conservation Trust’s recent Peatland Report 2020 was that the decision to end controlled burning in the USA resuited in a significant decline in bird life, and an increase in the extent and severity of wildfires.

Five leading countryside organisations, the Uplands Partnership, said that policy decisions on the future of heather burning should take into account the ‘valuable, compelling and contemporary’ evidence included in the dossier.

The six organisations which support the dossier are: The British Association of Shooting and Conservation, The Countryside Alliance, the CLA, the Moorland Association, National Gamekeepers’ Organisation.

The Game & Wildlife Conservation Trust is an advisory body to the Uplands Partnership.

To read the dossier, click here: Peatland Protection – The Science.