Peregrine falcons have thrived on grouse moors during lockdown, with successful fledging taking place in three nests across the Forest of Bowland and Peak District. 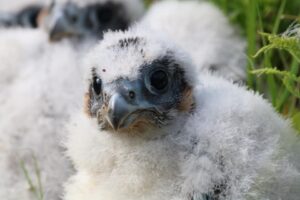 A Peregrine Falcon Chick in the Forest of Bowland

The fledging in the Forest of Bowland took place on a private estate which is managed for red grouse and other important moorland birds. A total of four chicks fledged, three females and one male, in one nest. The birds, which are amongst the world’s most common birds of prey, have been fitted with two non-invasive identification rings that will enable conservationists to monitor their progress and health.

Charlotte Burch of the Forest of Bowland Moorland Group, said: “We’re absolutely delighted to have seen four peregrine chicks on a local estate. They were all ringed at the ideal age and, having now fledged the nest site, will be trained to hunt by their parents. We’re lucky enough to have a number of peregrine nests on moorland managed for red grouse in the Forest of Bowland, so we’re excited to see what the future holds.”

In the Peak District, four chicks across two nests have successfully fledged in grouse moor areas of the Dark Peak. All four chicks have been fitted with both BTO leg rings and coloured plastic rings to enable identification at distance.

Richard Bailey of the Peak District Moorland Group, said: “For most of us, lockdown has been a difficult period. However, for the wildlife on the Peak District, it has meant a huge, and largely welcome, reduction in disturbances. These successful nests are a reminder of the positive outcome for our wildlife on moorland.”

Peregrine falcons are enjoying a turnaround in their success since a ban on organochlorines that caused breeding failure. It is estimated that there are over 1,700 breeding pairs in the British Isles, up from just 360 pairs in the 1960s. They are known to be charismatic birds that have long captivated spectators with their distinctive hunting style. Spotting their prey from high above, they drop into steep drives, known as ‘stoops’, reaching speeds of over 200mph, making them the fastest animal in the world and quicker than Formula One race cars.

Amanda Anderson, Director of the Moorland Association, said: “It is fantastic new that Peregrines have had ‘lockdown luck’ on moors managed for grouse shooting and is a testament to the daily conservation efforts of the gamekeepers. Successful nests in places that have not been occupied for many years has thrilled watchful keepers and we hope that now the chicks are on the wing, returning visitors will be able to enjoy seeing them. Watching a ‘stoop’ as they hunt their prey is exhilarating but understanding that the prey is also there because of active conservation on the back of grouse management completes the experience.”

RURAL COMMUNITIES HOPE TO MAKE MOST OF PANDEMIC-HIT SHOOTING SEASON On the eve of the traditional grouse shooting season, rural communities have been gearing up to make the best of the challenges presented by the COVID-19 pandemic. Plans have been put in place to ensure that restaurants receive the first grouse from the moors tomorrow. A widespread safety initiative, including the use of personal protection […]

Grouse shooting essential for the survival of Moorland Communities, new study finds University of Northampton researchers conduct wide-ranging survey into economic and social effects of the sport on moorland communities Professor Simon Denny and Tracey Latham-Green of the Institute for Social Innovation and Impact at the University of Northampton have conducted a new study into the economic and social effects of integrated moorland management – including grouse […]