The traditional grouse shooting season got underway today despite the challenges presented by the COVID-19 pandemic.

A widespread safety initiative, including the use of personal protection equipment, social distancing measures and food hygiene measures, has been implemented to ensure adherence to government COVID-19 guidelines. 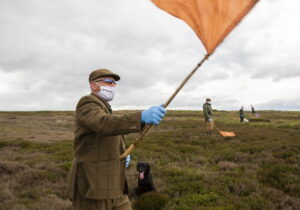 Plans have been put in place to ensure that restaurants will be receiving the first grouse in time for serving this evening.

For restaurant owners, the relief felt that the shooting season can go ahead is substantial. The Gladwin Brothers, a second-generation company which runs four game-serving London restaurants, typifies the importance of game to this country’s celebrated hospitality sector and the tradition of creativity that lies at its heart.

Oliver Gladwin, Gladwin Brothers Chef, says: “I’m extremely glad that the season has been given the green light. The game we produce is the backbone of my menu. Even during the summer months we’re serving pigeon, rabbit and squirrel, and from today onwards it’ll be grouse.

“My style of cooking is, ‘what grows together, goes together’, so while I was out on the moors this morning picking the first grouse to be eaten this evening, I was also picking the meadowsweet to go along with it. It’s a delicious flower with a distinct almond profile. Once you’ve smelled it, you’ll never forget it.

“As a second-generation business, the 12th is hugely significant for my family. My younger brother is the farmer and my older brother is the restaurateur, so we’re all involved at every step of the process.”

For game dealers, the go-ahead given to the shooting season has been similarly welcome. They remain aware, however, of the challenges they face in securing consumer confidence in the middle of a pandemic.

Andrew Dent, Director of L&A Dent Game Dealers, says: “The fact that we’re going to be able to get our business up and running is the most important thing, but it’s not going to be an easy start.

“Up until a few weeks ago, we didn’t even know if the season would be able to go ahead, so we’re just grateful for the opportunity to get things moving. We have orders for 100 grouse that’ll be eaten on the evening of the 12th, including 60 for London, which is really encouraging. We just have to hope that as the season gathers momentum, people’s confidence in going out to eat increases and business picks up.”

Amanda Anderson, Director of the Moorland Association, said: “Like everywhere, this has been an incredibly tough year for rural communities. However, at an estimated £2bn, the contribution made by shooting to the UK economy is vast and is exactly what’s needed right now. For rural communities in England in particular, research has shown that there is a direct economic benefit of nearly £70m.

“Beyond the revenue, the buzz generated by the shooting season gives us an opportunity to reignite the sense of belonging and community spirit amongst those that take part. We’re looking forward to demonstrating to shooting enthusiasts that with the right regulations and safety procedures in place, there’s no reason why the shooting community cannot thrive once again.”