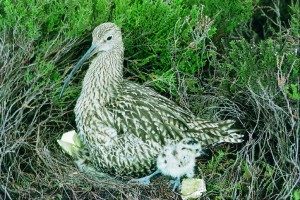 The Moorland Association is to ask the government to consider the success of curlew conservation measures on grouse moors as an example of how future agricultural policy could be framed, under the new Environmental Land Management Scheme.

Ahead of World Curlew Day on April 21, a new survey from the Moorland Association reveals that the bird is found on 90 per cent of grouse moors in the north of England. This is in sharp contrast to a severe decline in England generally.

Amanda Anderson, a director of the Moorland Association said: “The government has outlined its land management goals in three areas – local nature recovery, landscape recovery and sustainable farming, which will underpin future support. Grouse moors have shown the way in which this could work, by providing the gold standard of conservation land management for the curlew. We will make representations to Defra based on our experience across almost a million acres of land.”

The UK has a quarter of the world’s curlew population, but their numbers have halved in the past 25 years. Their last remaining strongholds are on moorland estates, due to the land management practices carried out by gamekeepers.

“They are displaying to one another now and have been prospecting for the best nest sites for about three weeks. Our curlew are quite early because we’re one of the more Southern moors and not very high. We also see flocks of juveniles returning – as many as 40 arriving together, but they don’t breed until their third season and the adults only lay 4 eggs, which is another reason why the population is precarious. They never nest in cover – they nest on open fields and burns where they can see any predators coming and on areas where the heather is short. It’s a real joy to hear their call, watch them nest and then see the chicks hatching.”

Dallowgill Estate is committed to conservation and habitat protection for red grouse, which also benefits curlew, lapwing, golden plover and other species. The estate has worked with an accredited ringer from the British Trust for Ornithology for the past two years. The waders are ringed and monitored to provide data on their behaviour, range and nesting success. This is used to inform future programmes of protection.

Conservation measures at Dallowgill include predator control, digging ponds and restoring wetlands, creating wildlife corridors and treating the sheep for tick, which helps reduce the potential for tick to pose a serious threat to curlew chicks. A tick infestation can kill a wader chick.

The curlew is Europe’s largest wading bird, instantly recognisable by its long downcurved bill, spindly legs and distinctive call from which its name is derived.

Defra has begun its seven-year transition period away from the Basic Payment Scheme towards new, sustainable, land management policies. Work conducted by moorland estates is closely aligned to the goals of local nature recovery, landscape recovery and sustainable farming.

The government has committed to protection of the curlew under an international agreement (Agreement on the Conservation of African-Eurasian Migratory Waterbirds – AEWA) which is in place until 2024. One of the ‘critical’ objectives under this treaty is promoting ‘land management techniques that reduce levels of nest and chick predation to those associated with stable or increasing populations’ of curlew.

Moorland Association members have also restored over 27,000 hectares of peatland and have blocked 2,945 kilometres of agricultural drains to re-wet the peat, as part of their commitment to restoring peatlands to optimum condition and improving habitats for rare wildlife.