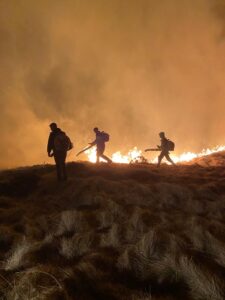 warning the public of the continued risk of wildfire on moorland over the Bank Holiday weekend.

There have been six major wildfires on moorland in the north of England since the start of the month. Many smaller fires are extinguished by gamekeepers without involving the Fire & Rescue Service. Conditions on the moors have been described as ‘a tinderbox’ because April has been one of the driest on record.

The fire at Marsden Moor, owned by the National Trust, burned for three days over last weekend and into this week, causing devastation over two square miles of moorland. There have also been fires at Rushup Edge and Baslow in Derbyshire; in Lancashire at Ramsbottom and Burnley; and in Greater Manchester at Dovestone Reservoir in Oldham and moorland near Tintwistle.

Richard Bailey, coordinator of the Peak District Moorland Group, said: “Gamekeepers will always assist the fire crews wherever possible to extinguish wildfires in the region, as do gamekeepers in other areas. We would urge the public to comply with the rules and never even think about lighting a flame on moorland.

“Anyone can help be part of the solution if they choose to tell others not to use a disposable barbecue or light a fire on moorland, and call 999 if they see someone doing so. We can all do our bit to protect these beautiful places and safeguard rare species.”

There is already a ban on disposable barbecues and Chinese lanterns in the High Peak as part of the Public Space Protection Order brought in by the local authority.

Disposable barbecues and campfires are also unlawful on open access land all year round, unless specific permission is given in advance by the landowner. Local authorities can impose a fine of up to £1,000.

In January Defra confirmed that if moorland is unmanaged, there is a risk of wildfire and that wildfire is the greatest threat to moorland.

Amanda Anderson, Director of the Moorland Association said: “Earlier this year George Eustice MP, Secretary of State for the Environment, rightly stated that wildfire was the greatest threat to moorland. It is our most important store of carbon that must be protected for the sake of us all.  Unfortunately, wildfires have become increasingly common and increasingly severe in recent years releasing millions of tonnes of CO2. Members of the public visiting moorland should adhere to the Countryside Code and help protect what they come to enjoy and keep the BBQ for the garden.”