The government should act now and make the use of sky lanterns illegal, that’s the message from leading farming, environment, animal and fire organisations. 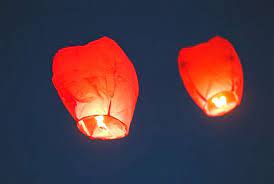 The group made up of 18 agencies, including the Moorland Association, has written to Environment Minister Rebecca Pow to explain how the Government’s approach not to regulate sky lanterns is now significantly out of date and out of line with other countries where the release of sky lanterns is considered an environmental crime due to the harm they cause animals, habitats and the countryside.

By enacting Section 140 of the Environmental Protection Act 1990 the Secretary of State can prohibit or restrict the importation, use, supply or storage of injurious substances or articles, such as sky lanterns. 152 local councils have already banned the release of sky lanterns on council property but with no national legislation the countryside and our farms remain unprotected.

NFU Deputy President Stuart Roberts said: “The global community are already recognising the dangers of sky lanterns. Countries like Australia, Brazil, and Germany already have national bans, and we must join them.

“This is a simple but incredibly effective and impactful step the government can take towards a safer, cleaner and greener rural Britain. We wouldn’t light a naked flame in our home and walk away, so why would we send one into the air with no idea whose home or habitat it could eventually destroy?”

Amanda Anderson, Director of the Moorland Association, said: “The government has identified wildfire as the most serious risk to precious peatland habitat, including blanket bog, which is of international importance. Moorland managers work consistently to reduce the risk of wildfires, which have become increasingly common in recent years, often causing devastation across vast areas. Banning sky lanterns represents a positive step in helping to prevent wildfires and protect moorland habitats.”

Paul Hedley National Fire Chiefs Council Wildfire Lead said: “NFCC fully supports a ban. Sky lanterns have been proven to start wildfires and property fires, kill or injure livestock, as well as polluting our natural environment. They put unnecessary strain on our critical services. Our advice is simple – don’t use them.”

Allison Ogden-Newton, CEO of Keep Britain Tidy said: “Although beautiful and often used for sentimental or celebratory purposes, the truth is that what goes up must come down and sky lanterns inevitably become litter. We believe that asking the government to ban sky lanterns will awaken everyone to this fact.”

“Sadly, many people are unaware of the potentially deadly consequences the release of sky lanterns can have for animals. Not only are they a serious fire hazard, but the RSPCA has had reports of suffering animals through ingestion, entanglement and entrapment, or simply the sight of a lit lantern in the sky causing terrified animals to bolt and harm themselves.

“We know many people are already aware of the dangers sky lanterns pose to animals and we are pleased to work in coalition with the National Farmers Union and others to raise awareness within the UK government of our concerns.”