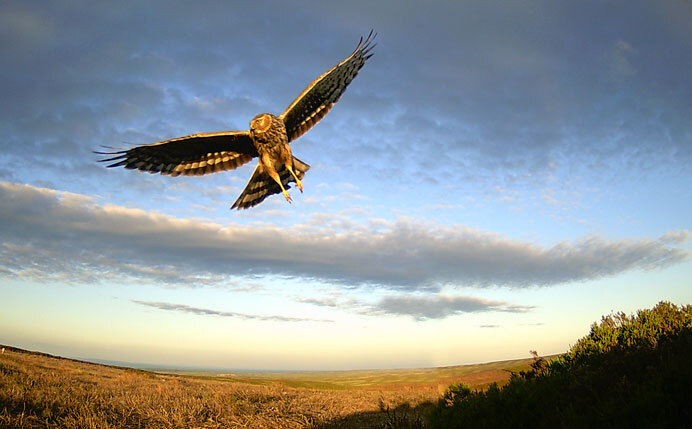 The prospect of another record-breaking year for Hen Harrier breeding rose today after reports of successful nests from several parts of the country.

Land managers have reported 24 successful nests on moorland in Northumberland, North  Yorkshire, County Durham, Cumbria, Derbyshire and Lancashire. Of the 24 successful nests, 19 are on moors managed for red grouse. It is thought that at least 77 chicks have fledged.

Video footage (https://www.dropbox.com/s/xfi7l6i9x3324dh/MA%20video.mp4?dl=0 ) from three estates in the Forest of Bowland, Durham Dales and Northumberland demonstrate that eight out of ten successful nests are on moorland actively managed for red grouse.

Last year, there were 19 successful Hen Harrier nests, of which 12 were on moors managed for red grouse and 60 chicks fledged.

This year’s data shows a further improvement in the population, following on from 2020 which was in itself a record-breaking year for Hen Harrier breeding on grouse moors.

Hen Harrier breeding and the number of fledged chicks have shown remarkable progress since the introduction of the government-led Hen Harrier recovery plan in 2016 and the availability of the Brood Management trial two years later. Upwards of 230 chicks have fledged, many benefiting from being fed additional food by gamekeepers.

Amanda Anderson, Director of the Moorland Association, said: “This is another excellent year for hen harrier breeding and the wonderful pictures and footage we are seeing from our members’ moors is truly heartening. Three good years in a row shows that we have the right strategy to help the population to recover to a sustainable level, occupying a much greater area of England.

“The management carried out on grouse moors by gamekeepers provides an ideal habitat for birds of prey, with fewer predators to steal their eggs, and good numbers of prey species such as small mammals and other birds. We will continue to support initiatives that are delivering results for the UK’s Hen Harrier population.”

The innovative Brood Management Trial involves grouse moor managers and conservation organisations working together, under strict licence, to test the best chances of nesting success for this very rare bird.

Her Majesty Queen Elizabeth II The Moorland Association and its members, who care for nearly a million acres of cherished heather moorland are, like the rest of the country, observing the period of national mourning as we reflect on the life of Queen Elizabeth ll. Her Majesty’s  unparalleled devotion to duty, warmth and selfless service to the nation have been […]

GAMEKEEPERS WORK IN PARTNERSHIP WITH BIRD EXPERTS FOR MERLIN CONSERVATION   The Moorland Association is highlighting game keepers’ year-round conservation efforts for a wide variety of moorland species. Now the National Gamekeepers’ Organisation has created a new video showing how experts from the British Trust for Ornithology, Foxglove Covert Local Nature Reserve in North Yorkshire and gamekeepers work together to monitor merlin on managed grouse […]