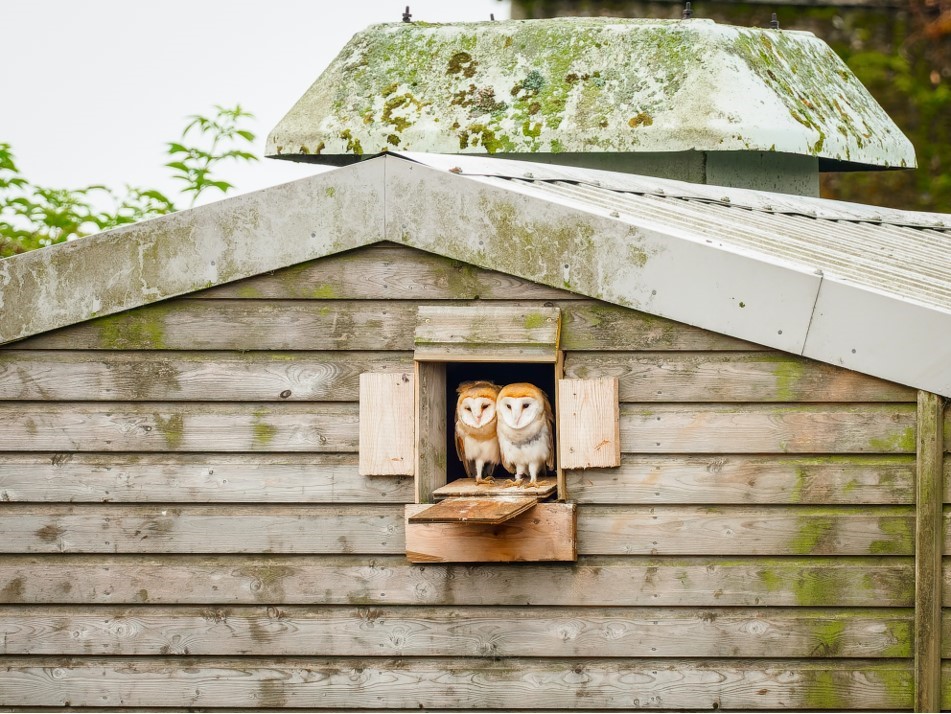 Gamekeepers in Nidderdale are celebrating the successful fledging of three barn owls after the sad loss of two chicks last year. In 2020 in the same barn three owlets hatched but two of the three fell to their death from a ledge several metres up.

To improve the beautiful and protected birds’ chances this year, gamekeepers put up a special nesting box, one of 20 installed in the region, which can make a real difference to their survival. All three of this year’s chicks, monitored from a safe distance, are now growing well.

Tracy Johnson of the Nidderdale Moorland Group said: “A well designed and positioned nest box is a safer place for Barn Owls to rear their young. This year, 29 chicks have fledged successfully in the eight boxes that we have checked. One brood had already fledged and left the box.  This gives us an average brood size of 3.6 chicks in Nidderdale, a really encouraging result. Working with the British Trust for Ornithology we have ringed 23 Barn Owl chicks to provide data on their survival rates and territory. This year has been a good breeding year after last year which is thought to be the worst year on record for barn owl breeding.

“The erection of nest boxes is thought to be a factor in their nesting success alongside habitat management. We now regularly see Barn Owls hunting for shrews, voles, mice and small birds on the moorland edges, although they are known usually as a low-ground bird.”

Moorland gamekeepers have erected 20 Barn Owl boxes since 2016.  Breeding was first recorded in 2018 in one of the boxes. The boxes are installed in traditional stone field barns and modern steel framed farm buildings where there is suitable surrounding habitat for the owls to hunt both on moorland estates and land owned by local farmers.

Another box was erected for a local farmer after his old chicken shed used by the owls had to be demolished.  The gamekeeper who made a Barn Owl box for this pair, also cut an entrance hole in the next-door chicken shed to provide easy access. The box was occupied by the Owls immediately and four chicks have been reared and ringed.

Tracy Johnson continued: “Barn Owls are now a big attraction in Nidderdale for birdwatchers and wildlife photographers as the Owls hunt in the early morning and evening in day light, especially when feeding young in the nest, and are easy to see in various areas of the dale from Scar House Reservoir at the top down to Pateley Bridge and beyond.

“Lack of suitable foraging habitats, prey species and safe nest sites are some of the main factors that limit Barn Owl numbers from recovering so the continued success of our Nidderdale population is a good indicator of the positive habitat management benefits that our sporting estates and farmers provide, and we are hoping these young birds will spread out further down the dale to increase the population in other areas.”

Weather plays a major role in the survival of these iconic owls as long spells of snow or wet weather can reduce hunting opportunities and poor hunting conditions in spring and summer can decrease the survival rates of chicks in the nest or stop the owls breeding altogether.

Barn Owls are a Schedule 1 species protected under the Wildlife and Countryside Act 1981 and although they will readily use sites that are in busy areas such as farmyards, where they are used to the day-to-day work of farmers, they do not like any sudden changes and all undue disturbance legally must be avoided.

RURAL BUSINESSES BOUNCE BACK FOR START OF SHOOTING SEASON Rural communities and businesses were today celebrating the Glorious 12th, the start of the grouse shooting season. Pubs, hotels, shops and suppliers voiced their support for the social, economic and environmental benefits that come with a successful grouse programme which can run until 10th December. One of the first grouse moors in action today was […]

MOORLAND ASSOCIATION URGES MAJOR RETHINK ON EFFORTS TO TACKLE DEADLY WILDFIRES The Moorland Association, whose members manage nearly one million acres of heather moorland, today called for a ‘major rethink’ on how best to tackle devastating wildfires. The association said today the surge in wildfires in the UK and internationally serves as the ‘starkest reminder’ of the need to reduce the fuel loads that drives wildfire. […]