The Disposable Barbecues Bill has passed its first reading in Parliament. If approved, the legislation would provide local authorities with the power to ban the sale of disposable barbecues and would also prohibit their use on open moorlands, which are particularly susceptible to wildfires.

Richard Bailey said: “The carefully managed habitat on these moorlands provides an ideal environment for ground-nesting birds but they are at risk from uncontrolled wildfires, which can rage across vast areas and destroy crucial habitats in a matter of hours. Wildfires also generate very high temperatures which can set light to the underlying peat, a vital carbon store. We are doing everything we can to limit the threat of wildfires but disposable barbecues should never be taken on to a moor.

“I’m very pleased that this bill has been proposed and I hope it will achieve cross-party support.”

In the 2018 wildfire on Saddleworth Moor 7cm of peat was lost which will take an estimated 200 years to replace.

England’s moorland groups, including the Peak District, Calderdale, Nidderdale, North Yorks Moors, Yorkshire Dales, Northern Pennines and Forest of Bowland Moorland Groups have all campaigned in recent years for a ban on the sale of disposable barbecues in areas close to the moors and a complete ban on their use on moorland. 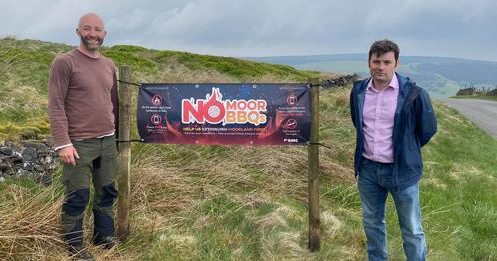 The Co-op has already removed displays of disposable barbecues in 130 of its stores that border moorland and national parks. It is hoped that other retailers will follow suit.

The National Fire Chiefs Council, Greater Manchester Fire Service, Moors for the Future and the British Mountaineering Council have also warned of the threat posed by instant barbecues.