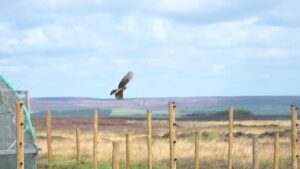 The Moorland Association today welcomes news of a further increase in successful breeding by Hen Harriers in England, with 75 per cent of nests on grouse moors.

Natural England reports that 119 chicks have fledged from nests in the north of England – a record number and the highest figure for 100 years.

This is an increase of over 40 per cent  from the 84 chicks fledged in 2021 and marks the sixth successive year of increases.

At least 75 per cent of nests are on land managed as grouse moors, all members of the Moorland Association. Many birds have benefited from supplementary feeding by gamekeepers, a tactic associated with increased nesting attempts.

Amanda Anderson, director of the Moorland Association said: “This has been another incredible year for the Hen Harrier and we are delighted the Moorland Association has played a key part. There is more work to be done and we have achieved an enormous amount in a very short space of time through our collective approach. The results have been amazing.”

The Hen Harrier is a ground-nesting bird and its eggs and chicks are therefore particularly vulnerable to predation. Grouse moors provide an ideal environment for Hen Harriers because the number of predators are controlled, particularly during the egg laying season, boosting the chances of successful fledging. Grouse moors also offer wide expanses of suitable territory with varied vegetation for nesting, limited disturbance from people and plentiful food sources for birds of prey, such as small mammals and the chicks of other birds.

Landowners and gamekeepers have worked in partnership with Natural England and other conservation agencies since 2016 on a range of actions to help boost the Hen Harrier population in the north of England.

The Hen Harrier is red-listed in the UK meaning ‘of most conservation concern’ and was considered at risk of extinction at the beginning of the 20th century.  As recently as 2013 there were no successful nests in England. In less than a decade there has been a complete turnaround for this species.

This year’s successful nests were in County Durham, Cumbria, Lancashire, Northumberland and Yorkshire. The expansion of territory used by Hen Harriers across the north of England is another favourable sign.

Since 2018, the Moorland Association and partners including The Game and Wildlife Conservation Trust, the Hawk and Owl Trust, The International Centre for Birds of Prey and Natural England have taken part in the Brood Management Scheme for Hen Harriers, a trial initiative, designed to establish a sustainable and well-dispersed Hen Harrier population in England alongside sustainable grouse moor management.

The project involves eggs and chicks from wild nests being reared for a few weeks at a specialist bird of prey centre before being transported to pens in suitable locations where they are tagged and monitored before being released into the wild, back into the same general areas that they came from. The trial has seen 34 chicks from 9 broods take to the wing in total and is considered a key element contributing to the recent turnaround for Hen Harriers in England.