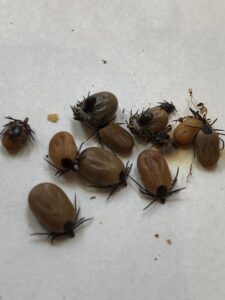 Peak District land managers are warning of the dangers of disease carried by ticks after  a surge in the number reported this autumn.

Ticks are small blood-sucking arachnids which live in areas of grassland, moorland, forest and even in parks and gardens. They feed on livestock, deer, birds, mice, horses, pets and humans.

Ticks carry a range of diseases, with Lyme disease by far the most common in humans. Symptoms can be debilitating and include fatigue, headaches, dizziness and joint pain.

In severe cases, Lyme disease can cause heart problems and inflammation of the membranes surrounding the brain and spinal cord.

Moorland Association member Dan Richmond-Watson of Midhope Moor said: “We are seeing a stratospheric rise in tick numbers in the Peak District at the moment. There has been a perfect storm of contributing factors this year including a hot dry summer and a change in land management in the area – lack of conservation grazing, and limited vegetation burning and bracken spraying have all made matters far worse.”

In the UK, about 3,000 cases of Lyme disease are diagnosed each year, up tenfold from 2001, but due to similarities with other diseases (including Covid) the true number of infections may be far higher.

In most cases the disease responds well to treatment with antibiotics, particularly if caught early.

However, Lyme disease is often very difficult to diagnose as the symptoms are similar to flu and ME amongst other diseases.

Dogs can also suffer from fever and lethargy following a tick bite.

Grouse moors are managed to prevent an over-abundance of tick-borne infections, which can prove fatal to red grouse, wading birds and sheep as well as causing disease in humans.

Bracken spraying and limiting the amount of excess vegetation reduces the areas where ticks can proliferate. Sheep are treated with an acaricide which is harmless to them but kills the ticks, to protect pets and people.

Dan Richmond-Watson continued: “I would urge Natural England to reintroduce conservation grazing, removal of bracken and excess vegetation to help reduce the prevalence of tick and limit the spread of disease.”

Julia Knight of the charity Lyme Disease UK said: “Lyme disease is a serious bacterial infection and it is important that it is diagnosed and treated quickly and appropriately to prevent any long term symptoms occurring. Lyme  disease is a preventable disease and  awareness of it is key, not only amongst the general public but also frontline health professionals so it can be either prevented completely or recognised and treated quickly.”

Ticks – what to look out for: