A six-month in-depth investigation by Defra into allegations of illegal moorland burning has found that moorland managers had not been illegally burning heather on areas of protected deep peat.

The time-consuming official investigation followed a wave of allegations from campaigners that extensive areas of grouse moor were being set on fire on deep peat and were therefore in breach of the new law.

In the past eighteen months, over 1,500 reports of illegal burning have been made to the regulator, with the overwhelming majority rejected. In fact,  there was only one technical breach of the regulations where a single fire set on heather growing on shallow peat had encroached onto heather growing on pockets of deeper peat.

One estate has therefore received a formal warning.

Campaigners including RSPB, Greenpeace and Wild Moors urged members of the public to report all instances of heather burning to them, investing in an app and erroneously harnessing NASA satellite imagery. Greenpeace boasted that they had ‘thrown the kitchen sink’ at the campaign. The reports were then passed on to Natural England and Defra as formal complaints. This has resulted in mass confusion as people are being led to believe that legitimate heather burning, carried out for conservation purposes, is against the law.

The Moorland Association condemns this deliberate exercise in alarming the public and demonising a legitimate land management practice and those who carry it out.

Amanda Anderson, Director of the Moorland Association, said: “The allegations levelled at trained and skilled grouse moor managers have proven to be false, misleading and fundamentally flawed. The results of the investigation show that our members are committed to best practice and abide by the new regulations. We do not burn peat and we do not deliberately damage moorland habitat.”

Carefully controlled vegetation burning is a crucial tool in the management of the uplands, which can produce a range of benefits for wildlife and for wider society, including reduced wildfire risk, which is vital due to the impact of climate change.

Sir Robert Goodwill MP, Chair of the Environment, Food and Rural Affairs Committee, raised the matter in a written question to Parliament.

The response revealed that there have been 1,584 individual reports of alleged breaches of the Heather and Grass Burning (England) Regulations since the regulations came into force on 1 May 2021. Of these, 1,022 could not be assessed because they included insufficient location information, while 490 reports were assessed by Defra and Natural England and were established to be either duplicate reports or not in breach of the regulations.

Only one fire was found to be a technical breach of the guidelines.

A further 72 reports, relating to the current burning season, which began on October 1st, have been submitted by the campaigners and will therefore also be assessed by Defra and Natural England.

Prescribed burning is undertaken on grouse moors under strict conditions set out in the Heather and Grass Burning Regulations 2021 and in partnership with Natural England.

The aim is to achieve a low intensity and small-scale ‘cool burn’ which removes the heather canopy but does not burn the underlying peat or moss layer.

Amanda Anderson continued: “It is disgraceful that organisations that claim to be conservationists have been shown to be so reckless. This campaign is simply designed to mislead the public. Geeenpeace employed satellite imagery and stated it had ‘thrown the kitchen sink’ at the campaign and RSPB prematurely called the allegations proof of ‘industrial scale breaches of regulations’ before they had been investigated by the regulator. The allegations of a blatant disregard of new laws have been shown to be utterly wrong and those involved should be ashamed of this deliberate campaign of misinformation.

“The regulations allow for prescribed burning of vegetation under licence for strictly defined reasons of wildfire mitigation, conservation and public safety. Demonising this legitimate management tool and those that use it is a disservice to society.  Intense wildfires caused by climate change can burn into the peat, destroy habitat and result in vast emissions of greenhouse gases as well as pulling Fire and Rescue Services away from life threatening incidents in our towns and cities”. 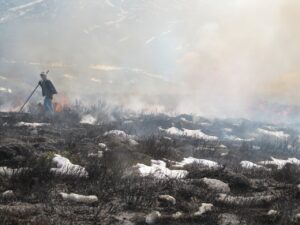