Amanda Anderson, Director of the Moorland Association, responds to the recent wildfires in Australia:

The horrific wildfires that are devastating large parts of Australia are extremely tough viewing. Pictures of badly burnt koalas, kangaroos and vast swathes of the countryside and people’s homes and livelihoods ablaze cannot but tug on the heartstrings and it is entirely natural for the public to demand that governments do more to stop them.

Many commentators and media outlets were swift to blame the fires on climate change. Australia’s prime minister, Scott Morrison, has been criticised both for his lackadaisical response to the wildfires and for his government’s climate policies, with his detractors claiming that his government is not doing enough to cut greenhouse gas emissions and being too in favour of coal.

Over the past decade there has been a surge of large wildfires and prolonged fire seasons across the globe. In the UK, 2018 and 2019 together saw more damage caused by wildfires than the entirety of the previous decade (2008-2017) with nearly 50,000 Ha destroyed in over 200 wildfires.

Climate change has lengthened the fire season in many countries through increased production of vegetation, through both warming and higher precipitation, which has led to higher fuel loads.

Yet whilst climate change has unquestionably influenced the global upsurge in wildfires, it is also important to acknowledge the role played by changing land management practices and human behaviour. Many of Australia’s indigenous people have strongly criticised the current land management policies that have curbed burning; polices which have utterly failed to either prevent or limit the current wildfires.

The indigenous approach to managing the driest habited continent on earth is through “cool” and “slow” controlled burns regularly conducted at night. These burns are designed to reduce fuel loads and to incrementally cover large tracts of land through multiple small-scale burns. The limited nature of these fires ensures that the forest floors are cleared of kindling and fuel whilst the forest canopies remain untouched. The relatively slow speed and small scale of these burns ensures that wildlife can easily escape out of their way.

This approach shares much with the land management practices traditionally used by gamekeepers to manage our UK moorlands. The “cool burning” of heather, when conditions allow in winter, helps reduce fuel loads on our moorland making them less susceptible to wildfires whilst preserving the vulnerable carbon-rich peat soils beneath. Fire chiefs in both Scotland and Wales have recently endorsed the use of controlled burning as a means of combating wildfires. Yet there is an apparent lack of long-term and joined up thinking from government to weigh up the environmental costs and benefits of this management.

Defra is currently undertaking a review of wildfire in England which will be used to inform future wildfire management planning but has sent out mixed signals. On the one hand Defra’s own guidance via the Uplands Management Group clearly highlights the critical importance of managing fuel loads. On the other, Defra has consulted on legislation to outlaw burning – despite a Voluntary Commitment by 95% of all Moorland Association grouse moor interests to only use fire where it will be sustainable on a deep peat moor.  The Moorland Association estimates that 30-40% of such sites have no suitable alternative management technique to controlled burning.

Added to the mix are the actions of anti-shooting activists and other environmental commentators who claim that since these controlled burns release greenhouse gases they must ergo be bad for the environment. You do not need to go all the way to Australia to see the flaws in this argument.

There is a world of difference between uncontrollable wildfires, burning with intense heat into the mosses and peat, and careful, skilled ‘cool’ managed burning of top-most vegetation only. The emissions from burning just shrub canopy can only release what has already been locked up as the plants have grown and can allow for greater carbon gains as mosses thrive with the canopy removed. Therefore, so long as the fires are small and do not burn down into the peat or remove surface vegetation, controlled heather burning can be a carbon neutral management technique.

What happens beneath the surface of our moorland is still a complex area of study with multiple conflicting factors at play however there are compelling arguments supporting the utilisation of skilled managed burning.

Controlled burning reduces the risk of wildfires which release much of the carbon trapped in the underlying peat. This is important as there is more carbon locked up in UK peat soils than in all the trees of Britain and France, representing 42 per cent of our entire carbon stock. You only have to look at Natural England’s emissions map to see that the moorlands of Northern England are the ‘green lungs’ of our country. 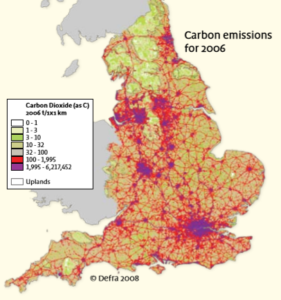 When Caithness’s Flow Country caught fire recently it was estimated that it doubled Scotland’s carbon emissions for the six days that it burned. The fire brigade subsequently cited the lack of precautions in allowing moors to become overgrown. In England, Saddleworth and Marsden Moors all suffered from wildfires despite peatland restoration projects to re-wet them coupled with no-burn policies, which resulted in high fuel loads. Moors that have lost an active game keepering team suffer further due to their sole reliance on our hard-pressed, under equipped Fire Services unused to managing moorland fires.

Defra is due to issue its report soon on wildfires – and we believe there is compelling evidence for controlled burning to be retained as an essential tool to reduce fuel loads. Taking a pragmatic long term and holistic view to protecting and improving the integrity of these precious upland peatland sites requires more tools in the tool kit, not less.

Blaming the global surge in wildfires on climate change may be an easy ‘get out of jail’ card but it prevents us from examining the failed imposed land management policies which contributed towards them. Combatting climate change is frustratingly slow and complex. But those that, perhaps understandably, see ceasing managed burning as a quick fix to reduce emissions are at the opposite end of the spectrum to those who argue that re-adopting indigenous fire management techniques in Australia’s bush is, on balance, the most environmentally sustainable solution. Sometimes, we need to fight fire with fire. Sometimes, we need to reach a compromise on our beliefs.