Our heather moorlands and their fringes offer some of the finest wildlife habitats in the country thanks to careful land management and the great skill of dedicated gamekeepers.

This is where special, endangered and threatened species such as golden plover, lapwing, grey partridge, curlew, ring ouzel and merlin often buck national declining trends. Studies have found that waders are up to five times more abundant on moors managed for red grouse and that, thanks to predator control carried out by gamekeepers, they have a three times better chance of fledging their chicks. Publications 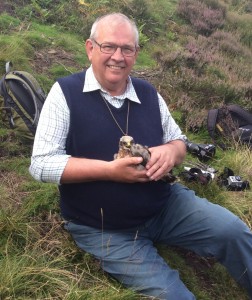 Meanwhile, Britain’s most talked about bird of prey, the hen harrier, has heather habitat for nesting, protection from its natural fox predator, and a plentiful larder of prey to feed chicks.

MA is working closely with Defra and other partners for the sustainable breeding of hen harriers across their former range in England.

To unlock the conflict on grouse moors, which make up less than half of the country’s suitable habitat, MA members support a captive rear and release programme.

The advocated brood management scheme would be triggered when nests reach a pre-determined density to prevent colonial nesting in any one area.  Chicks would be removed by experts to an aviary, reared and then released in suitable habitat elsewhere.

In combination with diversionary feeding, brood management would minimise the impact successful hen harrier nests have on the prey species in any one area, increase the range and therefore resilience of hen harriers in England and see more harriers settling to breed on grouse moors.

Another important endangered species, black grouse, is getting invaluable assistance from grouse moor managers. Suffering alarming declines, the beautiful birds are now down to an estimated population of  734 breeding males (2009) in England. They used to be common in every county. 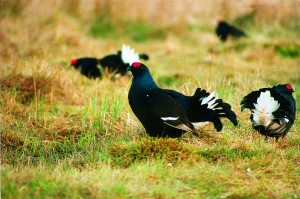 Ninety six per cent of black grouse are confined to the fringes of moorland managed for red grouse because our members have extended the areas of predator control, covering around 450,000 acres of moorland fringe habitat, to help them. MA members have also planted over one million native trees as a food source favoured by the breed in moorland-edge gills.

During winter, only a few species, including hardy red grouse, are found on the moors. Come spring, the scene changes dramatically. Large numbers of waders, which have wintered on lowland fields and estuaries, return to breed. Many of our nesting birds spend their winters here in the UK. Others, such as whinchat, ring ouzel and cuckoo, migrate to Africa.

Of the moors’ prized plants, Sphagnum moss is arguably the most valuable for its unique role in trapping carbon. Rich flora comes in many forms, including ling, bell heather, cross-leaved heath and bilberry. In the wet flushes and boggy areas, Sphagnum is joined by an abundance of cotton grass. Bog asphodel and insect-eating sundew are also found.

Thanks to Moorland Association’s massive commitment to safeguarding the land, wildlife is in plentiful supply. Healthy reptile populations go hand in hand with good habitats. Adders and lizards are common and slow worms found. Voles, mice and many other small mammals are abundant, providing essential food for owls and other predators.

Watch out for the emperor moth, the moors’ most impressive insect, with large, colourful, dayflying males and grey females on the wing in April.

A veritable wildlife treasure trove, enthusiasts in their millions visit the moors in the hope of catching a glimpse of some of its rich pickings.

The importance of careful habitat management

We know wildlife can thrive in carefully managed habitats. The Berwyn Report shows the devastating effects of removing that habitat management. In the 1990s, driven grouse shooting and habitat management stopped in the Berwyn Special Protection Area in North Wales, leading to a serious fall in bird species. Research into changes in upland bird numbers and distribution between 1983 and 2012 revealed stark findings.

The complete loss of lapwing and serious and rapid declines of many other red listed birds were highlighted. Hen harriers dropped by 48 percent, golden plover by 90 percent, curlew by 79 percent, ring ouzel and black grouse by 78 percent and red grouse by 54 percent.

We can learn much from these studies. The Berwyn report demonstrates with great clarity the consequences of losing grouse shooting as a land management tool. The report shows the hugely important work of MA members in their care for 860,000 acres of heather moorland in England and Wales. Without this work, the precious land would revert to scrub and forest and the heather moors lost forever, along with the loss of many red listed birds.