Keeper staff are employed all year round, irrespective of the season, and additional workers brought in on a casual basis, up to 50 people a day on the bigger moors.

Research has shown that associated spin-offs from grouse shooting in the North of England are worth in excess of £15 million a year, benefitting a raft of rural businesses. These include game dealers, the hospitality industry, equipment suppliers and transport operators, many of them based in some of the most remote areas.

Each year, owners and sporting tenants of our 190 member grouse moors in England and Wales spend a combined total of £52.5 million on land management, 90 percent of which is privately invested.

The majority of this outlay benefits some of the most rural communities in our uplands.

Red grouse are totally wild game birds of the uplands of Britain and are closely associated with heather moorland which forms over 90 per cent of their diet. They are not found anywhere else in the world.

Former mascot of the Scottish rugby team and emblem of the famous whisky, their territory stretches from Scotland down to England’s Peak District. They have all but disappeared from the moorlands of the southwest and cling on in sparse populations in Wales.

Unlike pheasant or partridge, the red grouse population cannot be boosted artificially by the release of birds that have been reared in captivity. Surviving in some of the bleakest parts of the country, they are uniquely adapted to survive. Under constant threat from foxes, crows, stoats and some birds of prey, they are also prone to diseases such as Strongylosis and Louping Ill.

Predator threat, combined with loss of habitat, has seen a worrying loss of the species from some areas, such as Exmoor and Dartmoor. However, thanks to good land management, renewed investment and disease control, populations have been steadily increasing in the north of England, allowing the shooting of surplus birds in the game season.

This commitment, investment and hard work also benefits a range of birds, now largely confined to heather moorland managed for our grouse. Lapwing, curlew, black grouse, merlin, ring ouzel and golden plover find refuge on the moors. The long tradition of gamekeepers’ dedication and extensive knowledge means our moors are carefully maintained to optimise conditions for the breeding and wellbeing of these remarkable birds. 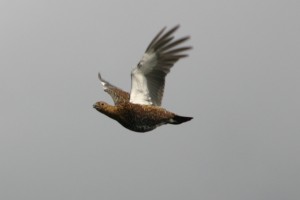 A red grouse in flight

Grouse have been one of the most sought-after game birds for over a century and command a high price from sportsmen all over the world. Delicious to eat, all our grouse enter an eager food chain and only where there are surplus populations are they shot – with the highest levels of care and responsibility. This is arguably the pinnacle of international game shooting.

In many upland areas, driven grouse shooting provides the only significant income for struggling rural economies. Without hefty subsidies from taxpayers, it pays for crucial conservation and maintains employment for significant numbers of people, particularly during the shooting season.

This essential employment supports fragile communities and helps schools, shops and pubs survive. Shooting parties benefit the hotel trade and a whole range of local businesses, from garages to gun shops and clothing manufacturers to food suppliers. Many would struggle in the depressed rural upland economy without this vital income.

In the 1990s, in the Berwyn Special Protection Area in North Wales, driven grouse shooting and habitat management stopped leading to a serious fall in bird species.

Research studies were carried out on upland bird numbers and distribution between 1983 and 2012, results revealed stark findings.

The complete loss of lapwing and serious and rapid declines of many other red listed birds were highlighted. Hen harriers dropped by 48 percent, golden plover by 90 percent, curlew by 79 percent, ring ouzel and black grouse by 78 percent and red grouse by 54 percent.

The Berwyn report demonstrates with great clarity the consequences of losing grouse shooting as a land management tool. The report shows the hugely important work of MA members in their care for 860,000 acres of heather moorland in England and Wales. Without this work, the precious land would revert to scrub and forest and the heather moors lost forever, along with the loss of many red listed birds.