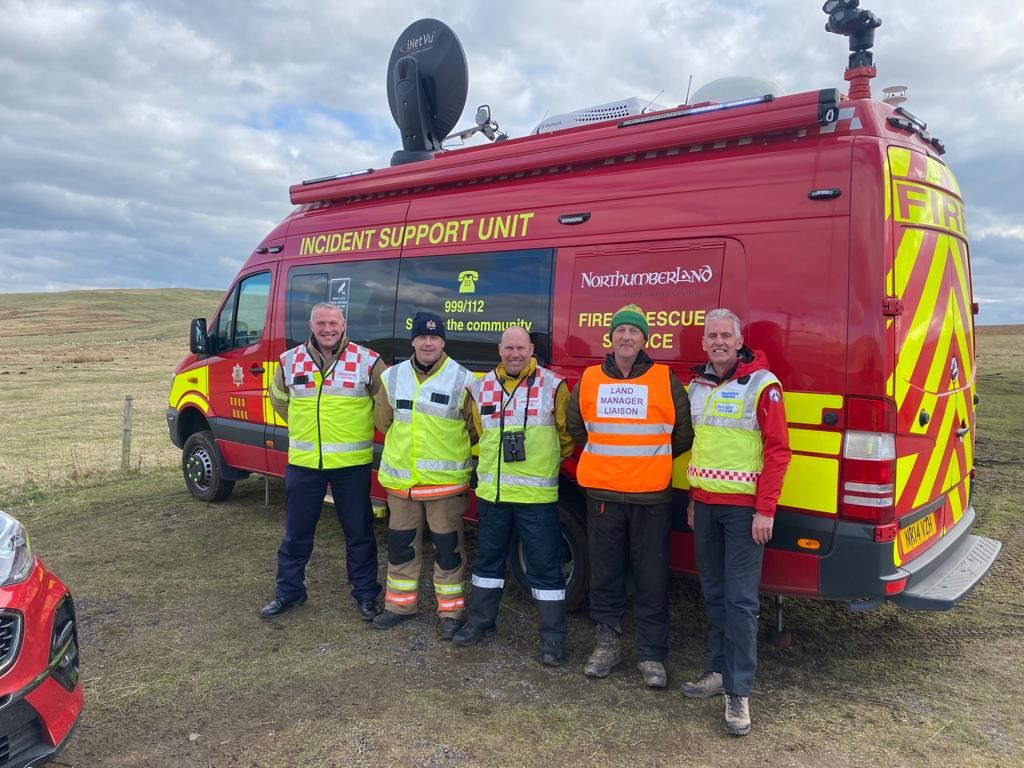 The spate of wildfires across England in recent weeks has underlined the impact of these wildfires, which can destroy thousands of hectares in a matter of hours and pose a serious risk to people, wildlife and property.

As one of the UK’s leading wildfire fire services, Northumberland Fire & Rescue Service contributes to the national development of fire and rescue training and strategic planning for wildfires. NFRS also closely with land managers, gamekeepers and farmers to develop site-specific plans and specialist training.

Linhope Estate in Northumberland has worked in partnership with the Fire & Rescue Service for many years.

In the past four weeks the estate has hosted two specialist training days for National Wildfire Tactical Advisers, who can be called on in the event of a major incident.

John Queen, headkeeper at Linhope Estate is a member of the Northumberland Fire Group and provides advice on wildfires. He says the training is crucial:

“Moorland wildfires can rage across vast areas once they take hold, even in areas which have been rewetted, any long vegetation will burn and fuel the flames. The specialist training provided by the Fire & Rescue Service has proved invaluable to help us better prepare and act quickly in an emergency.”

“Privately funded gamekeepers have equipment such as fire-fogging systems, leaf blowers and water bowsers which are useful in moorland areas inaccessible to a fire appliance. They are often first to sound the alert when there is a wildfire. We work together on specialist training, site-specific plans and also to warn the public of the risks of wildfire.

“Linhope Estate is a useful base for wildfire training as the terrain is challenging and there is very limited access for vehicles. This provides the opportunity to train in a typical moorland environment.”

A wildfire preparedness plan includes noting where there are water sources, recording priority areas to protect such as wildlife habitats, Sites of Special Scientific Interest, and any property. The plan also lists key people and their contact details so that lines of communication can be established quickly in response to an incident.

Nearly 100 site-specific plans have now been developed in Northumberland. This enables firefighters and gamekeepers to respond rapidly and with the greatest effectiveness. The template developed by Northumberland is now being used by other Fire & Rescue Services in England and Wales for their wildfire planning.

“Estates, gamekeepers and staff from the National Park work together to patrol  the moors and look out for people using a disposable barbecue or lighting a campfire. We also work together with the Fire & Rescue Service on general awareness-raising campaigns and signage. We would urge anyone out over the Easter holidays enjoying the moors to be mindful of the risk and never light a fire on or bring a BBQ to moorland.”

2022 is already a record-breaking year for wildfires, with 106 incidents recorded in England & Wales since 1st January. Many smaller wildfires are extinguished by gamekeepers before they can take hold. Those causing a wildfire can go to prison.

A range of factors have contributed to the increasing risk in recent years, notably greater public access to the moors, a warming climate and a reduction in vegetation management due to policy changes.