Natural England has granted a licence for the fifth year of a key research trial which aims to test a technique to help restore the Hen Harrier population.

The Brood Management Scheme has been exploring the possibility of taking Hen Harrier chicks from the nest to a specialist rearing facility and releasing them back into the wild to become successful breeding adults.

Since the trial began there has been significant progress in Hen Harrier breeding success in the wild with 224 chicks fledged.

In the five years prior to the scheme, only 51 chicks fledged in England.

Brood management is one of the actions within Defra’s Hen Harrier Action Plan, launched in 2016. The ‘trigger’ for brood management to be considered is two active nests within 10km of each other.

In these circumstances an application is made to take the eggs or chicks from one nest, rear the chicks in a specialist raptor facility and then re-release them as juveniles on an area of suitable habitat in the north of England all under strict licence conditions overseen by Natural England and a Project Board.

Just five broods to date have been managed in this way. Yet, the knock-on effect of the availability of the licence to everyone seems to be changing attitudes towards the birds of prey that eat chicks of other valued moorland birds, including Red Grouse, Curlew and Lapwing. Rearing the Harriers in captivity reduces the predation impact locally, and the aim of the trial is to test whether this can change attitudes and improve survival rates of Hen Harriers across England.

Moorland managers across the north of England participate in the Hen Harrier Action Plan by reporting nests, putting out extra food for  adult birds and monitoring  winter roost sites.

Fieldworkers from Natural England (licensed by the British Trust for Ornithology) fit satellite tags to the birds in order to track their migration patterns, range and future survival and breeding behaviour

John Holmes, Chair of the Brood Management Project Board, Natural England, said: “The brood management trial has been a key element in the Defra Hen Harrier Action Plan, alongside diversionary feeding, monitoring and improving intelligence to detect and prevent persecution. The trial has been conducted in accordance with strict licence conditions and we have gathered a good body of data on brood managed birds as well as investigating changes in attitude to inform future approaches to Hen Harrier conservation.”

Other organisations represented on the Project Board said:

Mark Cunliffe-Lister, Chair of the Moorland Association, said: “We are delighted to see a substantial improvement in the breeding success of Hen Harriers and the expansion of their range across upland England, with grouse moors playing a key role in delivering enhanced fledging rates. Brood Management has provided a blueprint for the delivery of a sustainable and well-dispersed Hen Harrier population, for the benefit of  Hen Harriers, sustainable moorland management and everyone who enjoys seeing our upland wildlife thrive.”

Henry Robinson, Chairman of the Hawk and Owl Trust said: “It’s wonderful to see Hen Harriers thriving in the wild with a little human help and intervention. This would not be possible without the participation of all the partners. The time and dedication of all those involved has delivered excellent results.”

Jemima Parry Jones, CEO, International Centre for Birds of Prey, brood management licence holder and raptor expert said: “Having been dubious about the project at the outset it has proved to be far more successful than I had dreamed. It is an honour to be working on this groundbreaking project that is clearly working, with no welfare issues and great survival rates. It could be argued that the brood managed birds are even healthier than those not involved in the scheme. The good fledging rates provides a platform for these beautiful birds to continue to expand their range in England and has already resulted in their successful breeding in the wild contributing further to the population increase.”

Adam Smith, Upland Research & Policy Advisor, GWCT said: “The brood management scheme provides essential evidence in order to develop informed policy on adaptive management not just for the Hen Harrier but also for a number of other vulnerable species. Ultimately, projects of this kind are a key element in ensuring our uplands are sustainable and provide a net benefit to biodiversity.”

At the end of the trial, the Natural England board and its Scientific Advisory Group will evaluate how successful the scheme has been and inform the next steps for conservation of the species. 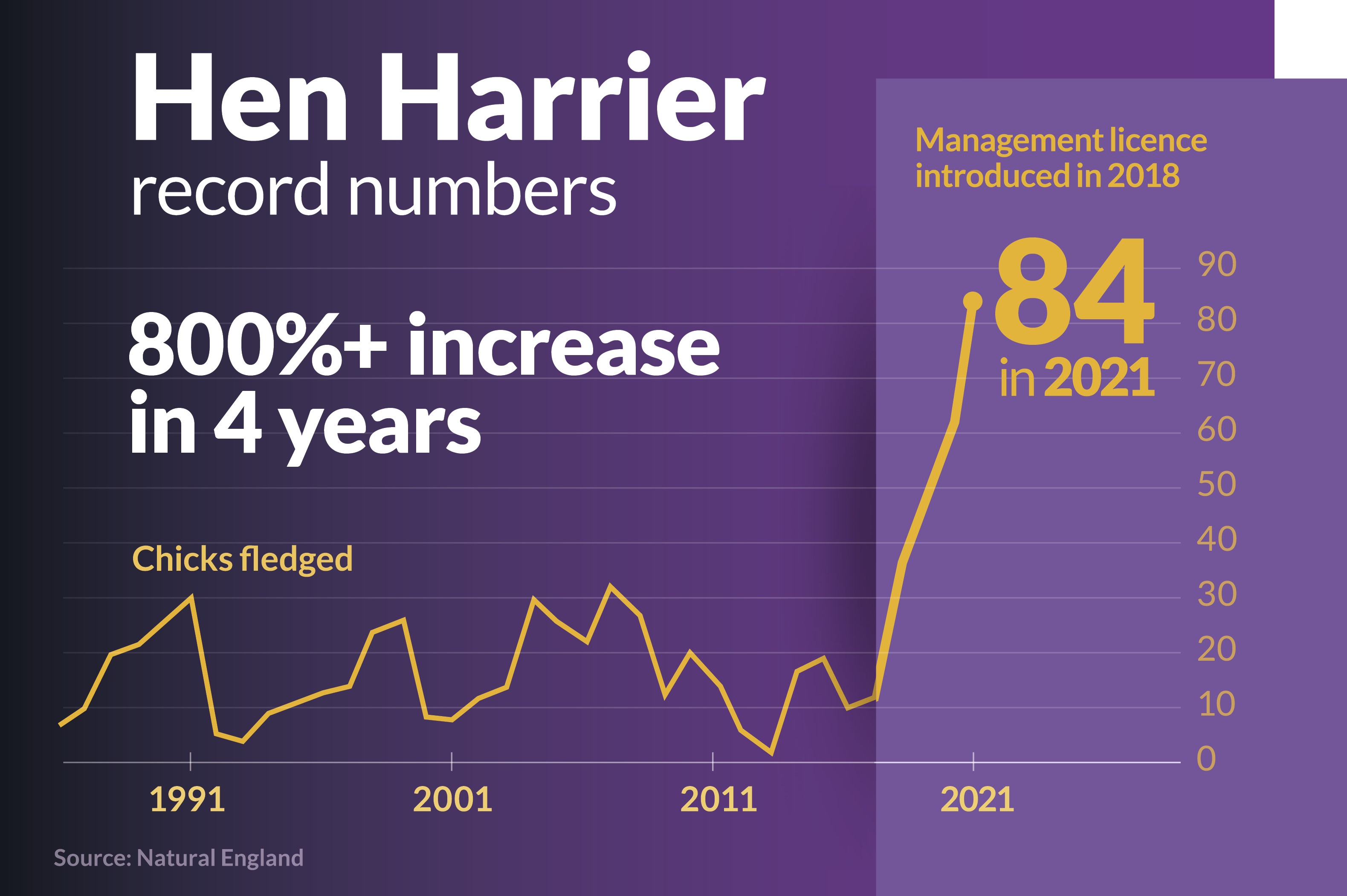